This episode does a great job in establishing just who these “Gilmore Girls” are, the people in their lives, and their hopes and dreams for the future. We meet Luke, the surly owner of Luke’s Diner, who makes a mean pot of coffee despite his disdain for all unhealthy foods—a quality which he only reveals to the Gilmore Girls in a kind of grudging concern for their physical health. The opening scene of the series actually takes place in Luke’s Diner where we see a young man striking out with Lorelai Gilmore. It is here where we get the first pop-culture reference of the series—the young man explains that he is just passing through town on a trip that he’s taking to the near-by town of Heartford and Lorelai jokingly calls him “a regular Jack Kerouac”.

He doesn’t get the reference. 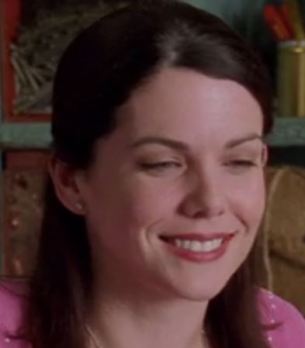 The references don’t stop there. After Rory joins the table there is some banter in which Ru-Paul and Macy Grey are mentioned topped off with a West-Side Story reference. That’s 4 references all in the first scene! The travelling young man tries to make a pass at Rory and in the exchange that follows we learn that Lorelai is Rory’s mom (too old for him, I guess) and that Rory is 16 (even though Alexis Bledel was 18 years old during filming.) The young man sashays-away and then the theme song comes on.

Before I go further I need to put in full disclosure here. I have been in love with Alexis Bledel since 2005 when I watched Sisterhood of the Travelling Pants and then again in Sin City. I never watched Mad-Men, so maybe I got over it. But now I’m watching this I find my infatuation has come rolling in like a Fundy tide. So let me point out a few things: Alex Bledel was born in 1981. And so in 2001, when this episode was being filmed, she was old enough to party. Keep that in mind. It might be uncomfortable if you don’t.

In the next scene we join Lorelai at her place of work—an Inn where she is the manager. It is here that we get introduced to Michel. Through some snappy dialogue, it is revealed that Michel is not gay. Don’t worry 2001 Family Channel America, he’s just a foreign gentleman with some serious tude’. Another character with tude’ enters in the form of a harpist who is played by Alex Borstein– the voice of Lois on Family Guy.

Lorelai is pretty selective with the employees that receive boss-like treatment from her. She’s buddy-buddy with Michel and indulges his tude’, but has no tolerance for Alex Borstein’s tude’ even though they are both giving off an equal amount of rude-tude’.

I like the harpist. She plays the harp beautifully and has no patience for people who enjoy her music without paying. Seems reasonable. Michel, who works the front desk, treats guests in a way that really should get him fired. I guess it’s okay because he’s French. That’s just the way French people are!

In the kitchen, we are introduced to Sookie—a lovable, and brilliant chef whose carelessness in the kitchen has no doubt caused serious anxiety and injury to those working close to her. Here she is hitting a co-worker with a frying pan. Does Lorelai care? Nope!

Soon after we meet a character named Lane. She is Rory’s best friend, and in the scene that follows the two of them enter into Lane’s house where we learn a lot about Lane’s relationship with her mother—Mrs. Kim. Mrs. Kim and Lane are Korean. However, Lane has been socialized as an American girl despite her mother’s best efforts to instill stereotypical Asian values in her.

The inability for Lane and Mrs. Kim to communicate is brilliantly portrayed upon entry into the house (which is also an antique store). Neither mother or daughter can get through a simple “Hello, mom I’m home” without it becoming a confused mess. It’s a stark contrast with the type of open and clear communication The Gilmore Girls have. Maybe if Mrs. Kim stopped speaking like Mr. Yunioshi it wouldn’t be a problem.

Big news! Rory is accepted into the private school of Chilton. It is clear that she belongs here. Among her peers at public school Rory is an aloof beauty whose outstanding academic achievement seems to come from a genuine love of learning. Chilton is obviously a good fit for her. But there’s a problem. Lorelai cannot afford the tuition. She tries to speak with someone at the school but her wit and charm run up against the unreasonable demands of an administrative bureaucracy—like having to pay tuition. 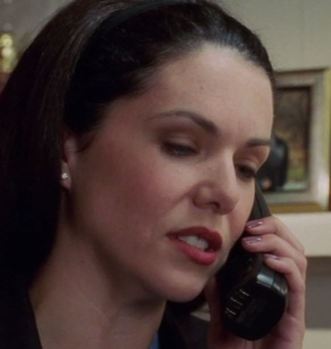 Lorelai is left with only one option: To ask her rich parents for money. DO IT FOR RORY!

The relationship between Lorelai and her parents is frosty, but Mr. and Mrs. Gilmore agree to pay the tuition on one condition: That both Rory and Lorelai attend dinners at their house on Friday evenings.

Why so formal?  Why does Lorelai only go to her parents as a last resort, and then dread the prospect of spending Friday evenings with them? All questions will be answered, but first:

Sam from Supernatural is actually named Dean. Dean is a boy. We see him early on in the episode, lusting after Rory while she walks past him into the school. 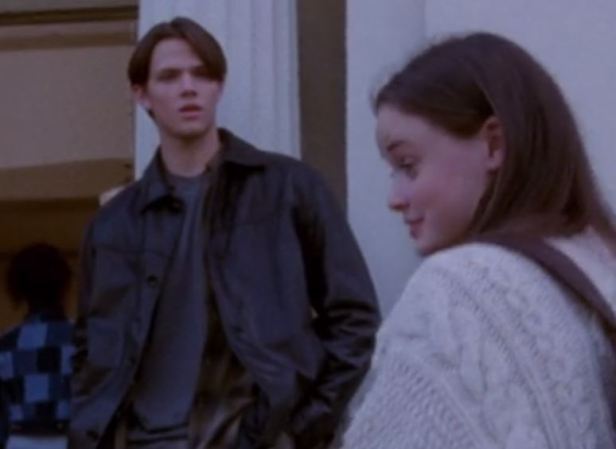 Unlike the young man at the beginning of the show, Dean is able to understand the pop-culture reference that Rory makes (Rosemary’s Baby). They walk to the home of someone named Mrs. Patty and we see that Rory is charmed by Dean. We also learn that she’s reading Moby Dick, because she’s hella smart!

Dean creepily tells Rory that he’s been watching her and that she’s nice to look at. Then he recounts a fond memory of watching her– probably leaving out how sweaty and moist his palms were at the time. 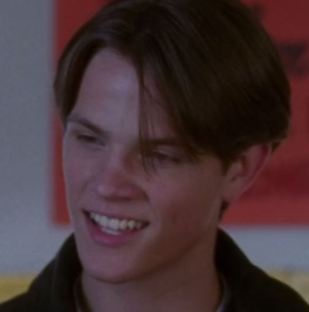 Rory is very taken with Dean and she tells Lorelai that she’s having second thoughts about going away to Chilton. This takes Lorelai off-guard, but remember that walk that Rory and Dean took to Mrs. Patty’s? Well, Mrs. Patty is a massive gossip and, seeing the Gilmore Girls passing on the side-walk, tells Rory that she has good taste in men. Comprehension hits Lorelai like a freight train. She is terrified that Rory will throw away her life for this mystery boy. Lorelai was herself only 16 when she got pregnant with Rory. But by whom? Let’s find out! Right now! But First!

Dinner at the Gilmores! 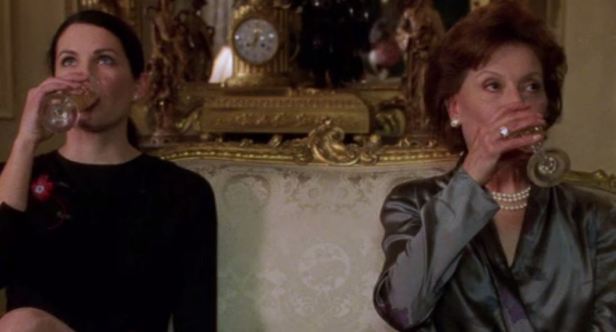 It does not go well.

Mrs. Emily Gilmore lavishes Rory with matronly affection. Mr. Richard Gilmore—a total boss–praises his grand-daughter for her tall stature then offers her a news-paper—he’s doing his best! Lorelai is another story. Emily maintains a frosty demeanor toward Lorelai and Richard shows great admiration for both Rory’s, and her estranged father Christopher’s, intelligence; suggesting that it is from her father that she gets it, and not her mother—who is sitting right there!

Lorelai excuses herself and goes into the Kitchen. Emily follows and the two of them have a shouting match. Their voices carry out into the dining room and Rory hears all about how Lorelai has had to borrow money from her parents to pay for Chilton. Lorelai did not want Rory to know this.

Lorelai’s pride is well-established in this first episode of Gilmore Girls, and so is Mr. and Mrs. Gilmore’s razor wit. All this will no doubt be explored further over the course of the next 152 episodes. Jesus…

They leave Mr. and Mrs. Gilmore’s, and go to Luke’s diner. Rory says that she wants to go to Chilton and appreciates her mother’s sacrifice. Conflict resolved! Also Luke cleans up well. He is clean-shaven when we see him in this last scene and he and Lorelai have an awkward but cute exchange which is a set up for when they eventually start banging.